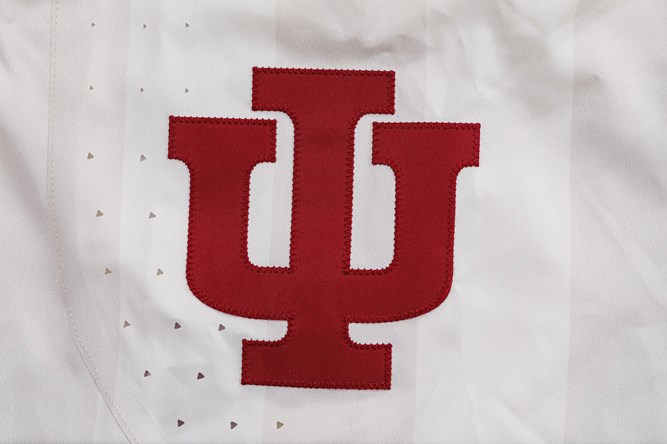 Eleventh-ranked Indiana men’s soccer (2-1-1) put together a satisfying performance in a 2-0 victory over No. 9 Akron (4-1-0), who came into the match 4-0 with 15 goals to their name. The Hoosiers held the Zips to four shots, just one of those on goal, Friday (Sept. 9) night on Jerry Yeagley Field at Bill Armstrong Stadium.

Sophomore forward Samuel Sarver and junior Nate Ward each scored first-half goals to give the Hoosiers the early advantage, and solid team defense took care of business the rest of the way.

• 7′ – Indiana got off to a fast start as senior forward Herbert Endeley penetrated the left wing on the dribble then released a cross that nearly found senior forward Maouloune Goumballe at the far post. The sequence earned a corner for IU, which gave way to two dangerous shots that were blocked for another corner. The next corner fell to sophomore forward Tommy Mihalic, who had space but fired just high.

• 12′ – Minutes later, Endeley had his assist and IU had its lead. Endeley went one-on-one with a defender at the edge of the box from the left wing, dribbled down to the end line, crossed and found the head of sophomore forward Samuel Sarver, who nudged it over the line for a 1-0 advantage.

• 32′ – Akron’s sophomore forward Jason Shokalook was nearly free from a through ball down the left flank. Racing across, junior defender Joey Maher caught up and made a tremendous slide tackle that cleared the ball for a throw-in and snuffed out the immediate danger.

• 47′ – Even with a two-goal advantage, Indiana came out aggressive in the second half, looking to extend its lead. Just two minutes in, a ball fell in the box to Endeley. His shot was blocked, but redshirt senior defender Daniel Munie was there to collect the rebound and fire a shot that forced a save.

• 50′ – Sarver had an opportunity for a brace moments later when he was played through into a one-on-one with Akron redshirt freshman goalkeeper Mitch Budler, but the attempt was fired just wide.

• 58′ – IU would have had a third if not for a pair of outstanding saves by Budler. Goumballe played a fantastic through ball to Mihalic on the edge of the box. Despite a tough angle, Mihalic made Budler dive to save his attempt. The rebound came to the head of Wittenbrink about seven yards out, but Budler stepped in front just in time.

had two shots saved in the span of about a minute towards the close of play. The redshirt senior was unlucky in the end, as he went without a goal Friday night despite three attempts on frame.

• Indiana is undefeated in 12 straight home matches, going 11-0-1 in that span and earning clean sheets in 11 of those games. The Hoosiers are an undefeated 2-0-1 at home so far this season, with all three matches coming against teams that made the tournament in 2021.

• Akron had scored 15 goals through four games coming into the match, but the Hoosiers outshot the Zips, 19-4, and held the visitors scoreless. Akron went without a goal just four times last season, its last goalless effort coming October 18 versus Michigan.

• The Hoosiers improved to 27-6-3 against Akron all-time.

• Sarver scored his second goal of the season and ninth of his career.

• Ward joined the season scoresheet with his second-career goal and first since March 23, 2021. Five different Hoosiers have scored in four matches this season.

• Endeley, Henderlong and Wittenbrink each earned their first assists of the season. For Endeley and Henderlong, it was also their first points of the campaign.

• Wittenbrink earned his first assist of the season and now leads the team with five points after scoring in each of IU’s first two matches of the year.

Indiana’s first match back on the road is nearby as the Hoosiers visit 12th-ranked Butler Wednesday (Sept. 14) in Indianapolis. The match is set for a 7 p.m. kickoff.