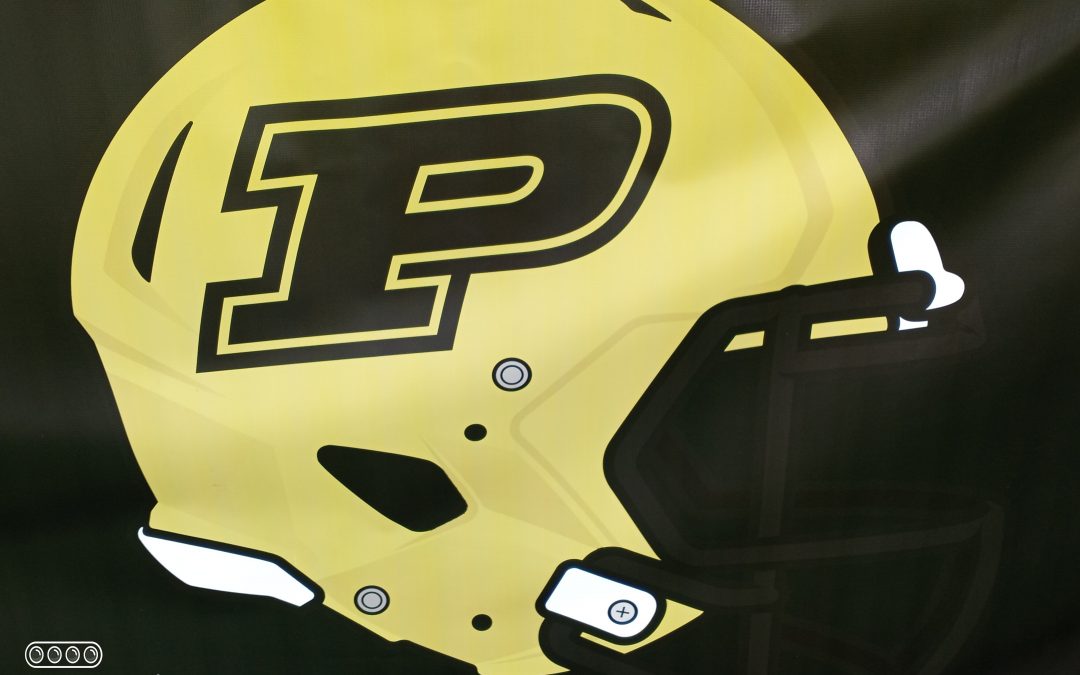 BIG 1-0 START CONFERENCE OPENERS • Purdue won its second-straight Big Ten Conference opener with its win against Illinois. Last season, the Boilermakers started conference play with a 24-20 victory vs. Iowa on Oct. 24, 2020. • The Boilermakers are 11-11 in Big Ten openers since 2000. Claiming the Big Ten opener has boded well for Purdue postseason aspirations in recent memory. Since 1997, which was former head coach Joe Tiller’s opening campaign as the leader of the Boilermakers, Purdue has advanced to a bowl game every time it has won its league opener but twice, in 2010 and 2020. HAVE YOU SEEN YASEEN? • Purdue redshirt freshman WR Abdur-Rahmaan Yaseen, who hails from Southfield, Michigan, had a breakout game in his first action of 2021, hauling in three catches for 77 yards in the win against Illinois (Sept. 25). • Those 77 yards included a massive 43-yard snag in the third quarter, the very first reception of Yaseen’s career. • Yaseen played in one game in 2020 before redshirting for the year. BATTLED FOR (AND WON) THE CANNON • The Cannon Game has a long and rich history, and the Boilermakers now stand at the front of that history with their most recent win over Illinois (Sept. 25). Purdue now leads the all-time series 46-45-6. • Since the Cannon Trophy was first awarded in 1943, Purdue has posted a 38-30-2 record against the Fighting Illini. • The Boilermakers have won two in a row in the series, five of six and 13 of 17 since 2003. • Uniquely enough, home teams are just 2-8 in the series since 2012, with both victories by Purdue at Ross-Ade Stadium, in 2017 and 2021.

After finishing the non-conference portion of its schedule last Saturday, Minnesota (2-2, 0-1 B1G) jumps back into Big Ten play this weekend as it heads to Purdue (3-1, 1-0 B1G) Saturday at 11 a.m. on Big Ten Network. The Golden Gophers opened the season with an intraconference matchup against Ohio State before three straight games out-of-conference. The Gophers have turned to redshirt sophomore Trey Potts as their lead back with the season-ending injury to Mohamed Ibrahim and Potts has delivered in a big way. In three games as a starter, he’s rushed for 440 yards and scored five touchdowns on 87 carries. In his first career start against Miami (OH) on Sept. 11, Potts ran for 178 yards and two touchdowns on 34 carries, smashing his previous personal highs in all three categories. In fact, Potts’ 34 carries are the second most by an FBS player this season. He followed that by rushing for 121 yards and a career-high three touchdowns on 26 carries at Colorado, then tallied 141 yards on 27 rushes against Bowling Green. Since Sept. 11, no player in the country has run more times or for more yards than Potts (more info on Page 3). The Golden Gophers are one of the strongest teams in the country in both rushing offense and defense. Minnesota ranks 13th in the country by allowing opponents just 77.0 rushing yards per game, while the Gophers’ offense ranks 26th with an average of 209.2 rushing yards per contest. Minnesota is one of just six teams in the country to rank that highly in both categories. The rush defense has given up just three yards in the last two games (-19 at Colorado, 22 vs. Bowling Green), while the offense has gained at least 175 in all four games this year, including a season-high 277 yards at Colorado on Sept. 18. Minnesota is 43-72-8 all-time in Big Ten road openers with a 1-3 mark under head coach P.J. Fleck. Saturday will be the 15th time that Minnesota’s first road conference game has been against the Boilermakers. The Gophers are 4-10 in the previous matchups, though they did win when their Big Ten road opener in West Lafayette in 2019. Sporting a 28-21 mark, Saturday will be the 50th game as head coach for P.J. Fleck at Minnesota. Of the 10 coaches in program history to have coached at least 50 games with the Gophers, only Henry L Williams and Bernie Bierman have a better record at the 50-game mark than Fleck (see box right). Fleck is 10th already in school history in games coached, and tied for eighth in wins. He needs one more victory to tie John Gutekunst (29-36-2, 1986-91) and Jerry Kill (29-29, 2011-15) for sixth place in Minnesota annals. Fleck’s .571 win percentage is third best among the 11 Minnesota coaches with at least 45 games under their helm behind only Williams (.786, 1900-21) and Bierman (.716, 1932-41, ‘45-50). In his ninth season as a college head coach, Fleck is 58-43 overall.

FACING PURDUE u Minnesota and Purdue meet for the 77th time on Saturday. The Golden Gophers own a 40-33-3 edge in the all-time series and have won the last three matchups. That’s tied with three straight wins over Indiana for Minnesota’s longest active win streak against a B1G team. u The Golden Gophers are 7-21 all-time in the series at Purdue. They won when the teams last played in West Lafayette in 2019, and a win this Saturday would mark the first time Minnesota has won consecutive games on the road at Purdue in program history. u P.J. Fleck is 3-2 all-time against Purdue, including a 3-1 record while at Minnesota. A win Saturday would mark the first time he’s beaten a team four times while head coach of the Gophers, and would it be the third time he’s beaten a team four times overall in his career (also defeated Illinois and Miami (OH) four times). u Minnesota has three players from Indiana on its roster: freshman DL Austin Booker (Greenwood), redshirt freshman OL Martes Lewis (Merrillville) and redshirt senior DL Esezi Otomewo (Indianapolis). Purdue has no Minnesotans on its roster. u Minnesota redshirt sophomore WR Mike Brown-Stephens and Purdue freshman WR Ben Van Noord both attended Springfi eld High School in Ohio. Gophers junior Tyler Nubin (DB) and freshman Jordan Nubin (DB) and Purdue redshirt freshman LB Ben Furtney all went to St. Charles North in Illinois. Purdue grad transfer Tyler Witt previously played on the offensive line at Western Kentucky, including the 2017-18 seasons when Minnesota Offensive Coordinator Mike Sanford, Jr., was head coach of the Hilltoppers. u Purdue enters the game 3-1 on the season and 1-0 in league play. The Boilermakers defeated Oregon State and UConn to open the season before a 27-13 setback at Notre Dame on Sept. 18. They then came back last weekend to top Illinois, 13-9, in their conference opener. u Purdue’s defense ranks eighth in the country by allowing just 14.2 points per game, while the total defense ranks 30th with 301.0 yards allowed per game. u Marvin Grant leads the team with 23 tackles, one of three on the team with at least 20 stops, while Branson Deen has a team-best 4.5 tackles for loss and George Karlaftis has 2.0 sacks. Cam Allen and Zane Greene have the two Purdue interceptions this year. u Quarterback Jack Plummer has been the team’s top passer by going 82-of-118 for 840 yards with seven touchdowns and no interceptions, while Aidan O’Connell has seen action in three games and completed 32-of-48 passes for 372 yards and three touchdowns to four INTs. Zander Horvath (44.5 yards per game), King Doerue (42.0) and Dylan Downing (32.8) are the team’s top rushers. Seventeen different Boilermakers have caught a pass this year with David Bell leading the way in receptions (21), receiving yards (319) and receiving touchdowns (3).

LAST TIME VS. PURDUE u Via the AP: Josh Aune’s interception with 44 seconds left at the Minnesota 13-yard line gave the Gophers defense a big lift and preserved a 34-31 victory over the Boilermakers when the teams met last year in Minneapolis. u The Boilermakers, boosted by a career-high 15 receptions for 116 yards from Rondale Moore, moved in position for what they believed was a 19-yard touchdown catch by tight end Payne Durham in the final minute. Durham was flagged for offensive pass interference, and Aune picked Plummer off on the next play, u Mohamed Ibrahim scored his third touchdown of the game early in the fourth quarter to give Minnesota a 34-24 lead before a missed extra point. Payne Durham’s scoring reception cut the lead to three points with 8:31 left.

u The Boilermakers got the ball back quickly, but Edward Dellinger, who had a 27-yard field goal blocked in the second quarter by Micah Dew-Treadway, pulled his 33-yarder wide right to keep Minnesota in the lead. u Tanner Morgan produced a crisp and commanding performance marked by pinpoint throws on third downs and deep routes to Chris Autman-Bell (129 yards) and Rashod Bateman (59). Cam Wiley added a touchdown run, while Ibrahim notched his sixth straight 100-yard game. u Purdue’s Jack Plummer completed 35 of 42 passes for 367 yards and three TDs in his first start of the season. David Bell caught eight passes for 104 yards and two touchdowns for the Boilermakers, who had 492 total yards.

LAST TIME IN WEST LAFAYETTE u Via the AP: Tanner Morgan threw for 396 yards and four touchdowns, both of which remain career highs, to help Minnesota hold off Purdue 38-31 in West Lafayette in 2019. u This one was never really close after the Boilermakers lost starting quarterback Elijah Sindelar and All-American receiver Rondale Moore on the same first-quarter play. Sindelar appeared to hurt his left shoulder when he was sacked and Moore appeared to suffer a lower left leg injury while running down the field. u Morgan took full advantage by completing his first 14 passes (tying a school record) throwing for 298 yards in the first half — four short of his previous career best — and running an offense that needed only two quarters to produce nine plays of 16 or more yards. u Morgan finished 21 of 22 with no interceptions, establishing a school record for completion percentage (.955) and the second best pass efficieny rating (306.7). u It didn’t take long for the Gophers to seize control, either. Rodney Smith capped the first possession of the game with a 2-yard scoring run. After the Boilermakers cut the deficit to 7-3, Morgan answered with a 70-yard TD pass to Chris Autman-Bell to make it 14-3. u Sindelar and Moore left on Purdue’s next series, but Jack Plummer completed the drive with a 7-yard TD pass to Zander Horvath. Morgan then threw TD passes of 45 yards to Rashod Bateman and 3 yards to Tyler Johnson for a 28-10 halftime lead. u Purdue running back King Doerue opened the second half with an 8-yard TD run, making it 28-17, but Minnesota answered with a field goal and a 47-yard TD pass to Bateman midway through the third quarter to seal it. u Bateman caught six passes for 177 yards and two scores. Autman-Bell had three catches for 97 yards and Smith carried 22 times for 115 yards.