THIS WEEK IN BIG 10 FOOTBALL 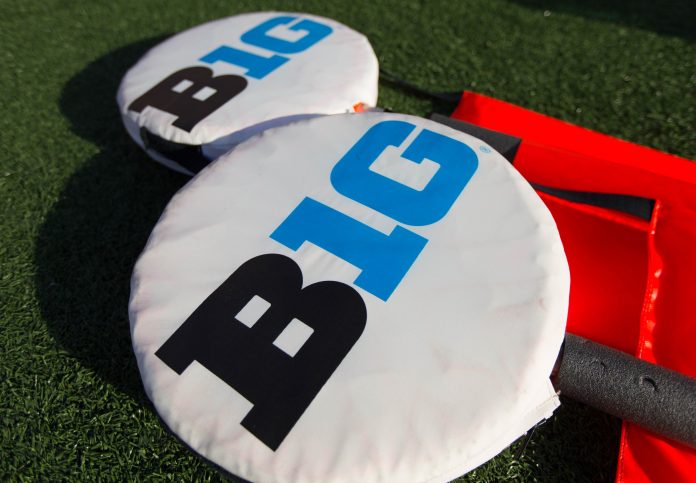 • Six Big Ten teams appear in the Associated Press Poll this week, highlighted by four of the top 10 teams in the country. Ohio State leads the conference at No. 5, followed by No. 6 Michigan, No. 7 Penn State, No. 9 Michigan State, No. 11 Iowa and No. 25 Purdue.

• Two Big Ten teams remain undefeated on the season, as Michigan State and Michigan are 7-0 and 6-0, respectively. Additionally, Ohio State is 3-0 in conference play and 2-0 in the East Division.

• No. 9 Michigan State defeated Indiana, 20-15, to improve to 7-0 on the season, marking the first time that the Spartans have started 7-0 since 2015 and just the eighth time in program history that they have won their first seven games. Additionally, the Spartans are now 4-0 in Big Ten play for the first time since 2017.

• No. 25 Purdue upset then-No. 2 Iowa, 24-7, marking the second time in the last four seasons that the Boilermakers have defeated a team ranked No. 2 in the nation. Prior to Saturday’s win over Iowa, Purdue defeated then-No. 2 Ohio State, 49-20, on Oct. 20, 2018. Senior QB Aidan O’Connell completed 30 of 40 passes for 375 yards and two touchdowns, while junior WR David Bell was named the Big Ten Offensive Player of the Week following a performance that included 11 receptions for 240 yards (21.8 avg.) and a touchdown. Bell’s 240 receiving yards marked the second-highest single-game total in school history and are the second-most receiving yards in a game by a FBS player in 2021.  Defensively, Purdue registered four interceptions — two by Big Ten Defensive Player of the Week Cam Allen — and four sacks.

• Minnesota improved to 4-2 overall on the season with a 30-23 win over Nebraska. The Gophers were led by QB Tanner Morgan who completed 20 of 24 passes — including a school-record 16 consecutive completions — and threw two touchdowns. WR Chris Autman-Bell caught a career-high 11 passes for 103 yards and RB Bryce Williams carried 17 times for 127 yards (7.47 avg.), including a 56-yard touchdown run.

• Northwestern improved to 3-3 overall with a 21-7 victory over Rutgers. The Wildcats were led on defense by junior DL Adetomiwa Adebawore who tallied seven tackles, four TFLs, a sack, two QB hits and a forced fumble. Adebawore’s four TFLs marked the most by a Northwestern defender since 2018. Offensively, sophomore QB Ryan Hilinski finished 18-for-33 for 267 yards and two touchdowns.

• Ohio State has scored more than 50 points in its last three games and leads the nation in total offense (563.2 ypg), while ranking second in scoring offense (48.5 ppg.) and second in team passing efficiency (187.76). The Buckeyes offense also ranks second in the country in third-down conversion percentage (.565 pct.).

• On October 10, for the first time in the history of the Associated Press college football poll (established in 1936), the Big Ten has five teams ranked in the top 10. Iowa leads the conference at No. 2, followed by No. 6 Ohio State, No. 7 Penn State, No. 8 Michigan, and No. 10 Michigan State.

• The 2021 Big Ten Football Championship Game will be played at 8 p.m. ET on Saturday, Dec. 4, at Indianapolis’ Lucas Oil Stadium and will be televised nationally on FOX. The winner will earn the Amos Alonzo Stagg Championship Trophy and a chance to play in one of the six bowls that comprise the College Football Playoff, including the Rose Bowl Game.