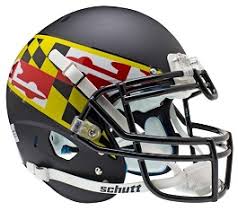 KEEP AND EYE ON:

4.1: Maryland improved its yards per pass attempt by 2.2 yards last season, that’s the seventh – highest jump in the nation. On defense, Maryland cut their yards per attempt from 8.0 to 6.1, and improvement of 4.1 yards.

20.2: Maryland lost two fumbles, and the Terrapin quarterbacks were intercepted nine times in 310 snaps. The 28.2 plays between turnovers were second in the Big Ten.

199.4. Coaches Mike Locksley and Dan Enos were on the Alabama staff when QB Tua Tagovailoa set the single – season passing efficiency record and 199.4. Now the two coaches will work with Tua’s brother at Maryland.

Maryland is concentrating on recruiting before anything else. The coaching staff was hired to go out and get the most talented players possible.

Coach Locksley doesn’t care to get players to fit a certain system, he wants the best players on campus.

Maryland’s offense will benefit with Locksley and Enos working together.

There is no question what offense Maryland wants to duplicate. It’s Alabama!

DC Brian Williams must improve the defense that finished 11 in the Big Ten.

The ceiling is high at Maryland and this will been interesting season for the Terrapins.

Maryland head coach Mike Locksley has put in a lot of time building this program and its foundation from the ground up. Making several changes in the coaching staff should help Locksley take the next step to being competitive in the Big Ten.

Dan Enos is the new OC, and former NFL assistant Brian Baswell takes over the OL. Both will see immediate benefits with their additions to the coaching staff.

Maryland has a solid quarterback to build their offense around and they have several returning skill players. The biggest question will be, who takes over at center and right guard.

The offense had to score a lot of points in order to win last year because the defense gave up 32 points per game and 430 yards of total offense. Maryland also have the second – worst rushing defense allowing 230 yards per game. As one would expect that is not a formula for success. Only six starters return on defense, but the secondary will be the primary concern for their opponents.

Maryland is perhaps more talented and deeper than they have been in several seasons. That doesn’t mean they will win more games in the Big Ten East. Tagovailoa can make things happen and with the weapons he has and the offensive line, Maryland will score points.

They will find out early just how good they are when Maryland hosts West Virginia September 4. The stretch of games starting October 2 against Iowa and finishing November 20 against Michigan will decide Maryland’s season.