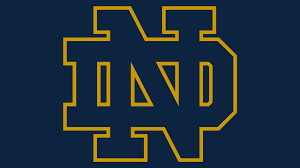 Mike Brey and the Irish were rolling. They went to back-to-back Elite Eights in 2015 and 2016, then finished second in the ACC and won 26 games in 2017. But after that came four consecutive seasons of shocking mediocrity in South Bend — during that stretch, Notre Dame failed to post a winning record in ACC play, causing some concern that the end was near for Brey. Thankfully, the Irish responded a year ago with a 15-5 ACC mark, which tied for second in the league and culminated in an appearance in the NCAA Tournament. Notre Dame earned an 11-seed and knocked off 6-seed Alabama in the First Round before losing to Texas Tech with a Sweet 16 berth on the line. “I needed a good year last year,” Brey admitted. Brey got it, and he can thank South Bend native Blake Wesley. Wesley came out of nowhere to lead Notre Dame in scoring (14.4 points per game) in 2022, becoming a one-and-done first-round NBA Draft pick in the process. Fellow starters Paul Atkinson Jr. and Prentiss Hubb have also departed, but Brey is celebrating the return of his own version of the Big 3: grad students Dane Goodwin, Nate Laszewski and Cormac Ryan. “I wasn’t sure that any of them would be back when the season ended,” Brey said. “But it was huge that all three of them returned.” While the Irish did lose a young star guard in Wesley, they will welcome in another top[1]flight talent in highly regarded frosh in JJ Starling.

When Notre Dame and Brey have had success, it has largely been predicated on experience. That’s why this season appears as though it could be another one that ends with an NCAA Tournament appearance. Goodwin, Ryan and Laszewski are all fifth-year players, and six of the 12 scholarship players on the roster are currently enrolled in grad school. “We’re old,” Brey said. “Really, really old.” Goodwin has transitioned over the years from a high school four-man to a versatile guard who was second on the team in scoring and shot a scorching 46 percent from 3. Ryan came on strong late in the season, and it coincided with him processing the game better on the offensive end. Laszewski opted to return to school and brings size and elite shooting back to South Bend, and this past offseason Brey has pleaded with Laszewski to hunt his shot and “to not play safe.” Notre Dame shot 38 percent from the 3 as a team last season and could be even better collectively this year. The trio of Goodwin, Ryan and Laszewski combined to make 184-of-418 shots (44 percent) from long range in 2022. Veteran guard Trey Wertz, who has scored more than 1,000 points over a four-year career that began at Santa Clara, is also back after averaging 4.0 points per game off the bench while hitting 39 percent of his triples. Brey still wanted to get older in the offseason and added Niagara’s leading scorer Marcus Hammond (18.1 ppg), a quick guard from Queens. After four seasons in the MAAC — most recently under former Duke point guard Greg Paulus — the 6-3 flamethrower decided to transfer to the high-major ranks, where he’ll showcase impressive shooting off the bounce. “He’s always had to make plays and now he’s learning that these guys pass it so well and they’ll find him instead of him having to make every play,” Brey said of Hammond. Then, there’s the aforementioned Starling, a consensus top-25 recruit and New York native who played high school ball at La Lumiere School in Indiana. In addition to him, another top-100 player in 6-foot-8 power forward Ven-Allen Lubin joins the fold. Starling comes in with lofty expectations and Brey also anticipates Lubin having an immediate impact. Lubin is a physical forward who defends, rebounds and blocks shots — he doesn’t need to score to be effective. “JJ is the whole package, and Lubin is going to help us right away,” Brey said. “We knew he (Starling) could shoot it, but he’s a much better passer than I thought and he is really good off the dribble. He’s so easy to play with, and doesn’t need the ball in his hands to be effective.”

Brey and the Irish aren’t overly deep, and they also need to make sure they don’t get dominated on the glass on a consistent basis. Notre Dame goes seven strong with Goodwin, Ryan, Laszewski, Star[1]ling, Lubin, Hammond and Wertz. Additionally, Brey is confident that 6-9, 240-pound junior big man Matt Zona will be a serviceable and effective backup who does all the dirty work and has no issue throwing his body around. “We’ve always played seven or eight guys and those guys play heavy minutes,” Brey said. After that, it’s a bunch of players who have been in the program and haven’t been able to get on the court much. Brey is hopeful that 6-6 sophomore wing J.R. Konieczny, who averaged 1.6 points and played just seven games last season, can see an expanded role this season. Or maybe athletic junior wing Tony Sanders Jr., who scored a total of six points last season and appeared in just six games, can also make strides and become a part of the rotation. Freshman big man Dom Campbell has a bright future, but it’ll be surprising to see the Maine native on the court much this season. The same can be said for oft-hurt senior guard Robby Carmody — who has dealt with three major injuries and only played 16 games in his four years on campus. Brey isn’t nearly as concerned with his depth as he is with going up against rugged, strong, athletic frontlines. Notre Dame doesn’t have a big-time re[1]bounder this season as it has deployed in the past with John Mooney, Luke Harangody and Bonzie Colson. “We need Lubin, Nate and Zona to hold their own against some of those frontlines,” Brey said. “Rebounding is my biggest concern.”

Wesley was the X-factor a year ago when he led the Irish in scoring as a freshman and also helped lead Notre Dame to its first NCAA Tournament berth in five years. Starling is a completely different player than Wesley, but he’ll need to be as impactful for Brey to make back-to-back Big Dances. Starling is a much better perimeter shooter than Wesley, but Wesley was able to make tough shots, get to the basket and also score in transition. “Blake had the ball in his hands and made plays,” Brey said. “We don’t go anywhere without Blake last season. But Blake needed the ball in his hands more than JJ.” Goodwin, Laszewski and Ryan are all quality college players. Hammond should come in and give Brey another scorer, but it’ll be Starling who has the highest upside and will determine this team’s ceiling.

There’s no reason this shouldn’t be a tournament team again with a trio of experienced starters and the addition of a couple of talented freshmen. The loss of Wesley was unexpected and will hurt, but Starling should slip right in and make an immediate impact. The 63-year-old Brey is reinvigorated. This is a guy who had a stretch from 2010-2017 where he went to the tourney seven of eight years. He’s had some terrific offensive teams, and feels that this one can score at a high level. “We can shoot it, we can pass it and can really move the ball,” Brey said. “We’ll be good positional defense. It’s just getting that first miss.” And now the holdovers have gotten a taste of winning, and that NCAA Tournament experience should help the Irish to get back to the dance. At least, that’s the expectation again around South Bend.